Why they are special…

Bali is popular for its many generations of painters. Although we are familiar with father-son, grandfather-father-son, uncle-nephew, or even brotherhood ties of painters, it is seldom for us to stumble upon a tie – a brotherhood – this special and meaningful. That is why we entitle this article “Band of Brothers”. We are very happy to encounter I Made Suta, I Nyoman Suarta, and I Nyoman Sarta: the three brothers in a family. Although sharing the same spirit, their works are diverse – each is special with his very own style. Their passion towards Balinese traditional painting is their never-ending fuel to keep on striving to produce their one-of-a-kind paintings. We shall see their journey and works in this current edition

I Made Suta – the Black and White Maestro

Suta, the eldest brother who was born at Taman Kaja – Ubud on August 6, 1960, is the first who paint among them three. Never had a formal teacher, he got his influence from the painters he adored: Ida Bagus Made Poleng, I Gusti Made Deblog, and Rudolf Bonnet. After finishing his study at SMSR (Sekolah Menengah Seni Rupa)/ High School of Fine Arts, he inevitably had to face the bitterness of economic difficulty. Sacrificing his dreams to support his parents and other siblings, he had to first work in the hotel industry for four years. However, his love for the arts made him make a comeback. In 1986, he decided to go on with his fine arts study at IKIP (Institut Keguruan dan Ilmu Pendidikan) PGRI/ Institute of Teaching and Education. This makes him the only one of the three brothers who has a proper art education. After years of work as a lecturer, Suta finally decides to be a full-time painter. He is a perfectionist, the most serious character among the three.

I Nyoman Suarta – the Sports Painter

Suarta, the second brother, was born at Taman Kaja – Ubud on August 17, 1962. Since early age Suarta has already shown his interest in both sports and painting. That was why during high school, he entered SGO (Sekolah Guru Olahraga)/ Teaching School of Physical Education (PE). Afterwards, Suarta studied at Faculty of Sports & Health at IKIP (Institut Keguruan dan Ilmu Pendidikan) PGRI/ Institute of Teaching and Education. He is still a PE teacher until today. This fact does not mean Suarta put aside his dream as a painter. Confessing his other brothers – I Made Suta and I Nyoman Sarta – as his aspirators, Suarta also got his influence from I Nyoman Ridi, another prominent figure in Balinese traditional painting who is well known for his strength in drawing anatomy. Suarta is the quietest among the brothers; he is as calm as the breeze.

I Nyoman Sarta – the Painter of Movement

Sarta, the third brother, was born at Taman Kaja – Ubud on July 18, 1964. When asked about his journey of becoming a painter, he remembered a memory of his days in elementary school. His drawing was so good that his teacher decided to give him a 40x60cm canvas – something quite rare back then, and equipped him with necessary brush and color pallets. He came home to ask help from his eldest brother and never once leave painting since that day. Sarta went to a standard high school, choosing neither fine arts nor sports like his other brothers and afterwards, decided not to proceed with formal education in fine arts. He wants to be free of pre-conception and paints whatever feels right to him. Influenced by Rudolf Bonnet, a maestro of anatomical painting, Sarta blends his knowledge and observation into one of his own. He is the one who laughs the most among the brothers. 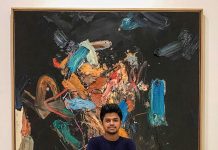