Beranda ART-to-date Exploring the Meaning of a Broom

Eleven young artists from Bandung were challenged to create works from a spoken agreement of taking up a theme from a banal object, which they turned into something meaningful.

Creativity does not necessarily come from grand and fantastic things. Things and events that are considered unimportant, insignificant, and banal may also be a source of inspiration. This is what 11 young artists from Bandung had done when constructing a concept for their group exhibition. Instead of taking up great themes that touch on socio-political, economic, or gender issues, they took up the ‘broom’ as a main theme for the exhibition titled Subject Matter: A Locus of Collectivism at Art: 1 on 29 June – 13 July 2013.

The decision was interesting, but also risky. They were aware that the theme of ‘broom’ would not interest collector, let alone to purchase it. The majority of art collectors favour buying works from established artists with a ‘name’ to avoid the risk of obtaining ‘cheap’ works.

This is unlike young collectors who are brave enough to extend their arms to embrace emerging and newcomer artists. They know that artists could be ‘long-term investment’. “Our young collectors learn quickly (to understand art) so they dare taking risks,” said Asmudjo Jono Irianto as the curator to Sarasvati after opening the exhibition.

Generally, artists decide on an exhibition theme after grouping their works into a specific common thread. However, a reverse method was employed in this exhibition. The artists were asked to interpret the agreed theme into their works. Young artists were encouraged to be more creative than usual. They also had to be able to change the seemingly banal and ordinary theme into something meaningful and valuable.

In this case, the broom no longer appears in its physical sense of being a household tool, but instead has a deeper and more significant meaning. “Art, whatever it is, is important. The task of the artist is to make insignificant things significant. This is important as an exercise,” said Asmudjo. From the visitor’s point of view, the theme asked them to pay more attention to the working method of the artist rather than the end product or the problems being represented. The unusual choice of theme also pushed the to explore deeper to find meaning. “The work no longer becomes an illustration that depict an issue or a theme,” Asmudjo explains.

The outcomes of the 11 artists’ interpretation to the word ‘broom’ bring about various forms of art according to their experience and knowledge. The broom acts like a coordinate point that brings together the artist’s knowledge as an individual with the collective understanding built together with other artists. The works exhibited range from not only painting, but also ceramic, sculpture, and photography.

Agung Prabowo – who goes by the pseudonym Agugn – translated the text ‘broom’ into three 2-dimensional works created with the techniques linocut and relief print on paper. Among the three works – titled The Crowd, Playground and Spatial Matter – the physical form of the broom appears as an unseen tool. Instead, Agung represented it as a “rhetorical code that simply comes up in a metaphoric language.”

Antonio Sebastian Sinaga (Nino) exhibits two photography works and an object as an artifact titled Dream. Unlike Agung’s works, the broom as an object appears straightforwardly in three of his works – Artefact, Witch and Castle Guard. Nino positioned the broom as something that fosters imagination, which places him as a child who fantasizes. “In the stories about witchcraft and fairies, the broom is a tool for flying and a weapon for self-defense,” Asmudjo mentions. 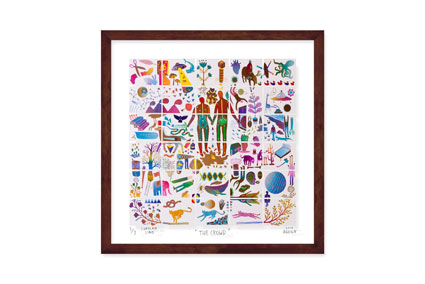 Cinanti Astria Johansyah (Keni) who expertly works with water colour, in this exhibition displayed water colour works divided into multi-panel canvas. Unlike the other artists who treat the ‘broom’ as a symbolic tool, Keni relates this to a foreign adage: “jumping the broom” – a phrase used in African-American marriage rituals. It is interesting that in her paintings, Keni “jumped the broom” with a bison, a dolphin, a rat, and a sheep. It is as if she wishes to express that she will maintain her love for animals all her life, “until death do us part.”

Similar to Keni’s work, the same method was also used by Endira F. Julianda in her work Blue Room. Endira also used a popular phrase taken from a song by Perry Como, a famous Italian musician, titled Blue Room. There is no broom as an object in her work, only a symbol of the function “sweeping”. “She uses the broom symbolically as a tool to erase details in the image of rugs in her painting. As such the space in her paintings no longer appears organized,” Asmudjo notes.

Leoardiansyah Allenda’s work veers away from his usual tradition. He presents a drawing titled Study Janitor. Coming from an idea about hygiene, Leo’s ‘broom’ sweeps clean several steps from drawing that he does not think are necessary. Bonggal Hutagalung used a different method in presenting the ‘broom’. In spite of trying to keep a common thread, the ceramic objects that he arranges in two panels has no associations. He creates the objects because he likes them. And, the objects of broom and axe in his works become symbols of tools that will clean up a variety of objects that he does not like.

Ultimately, the exhibition is more of an exercise event for young artists. Asmudjo leads the artists to escape their comfort zone by reading the possibilities of methods they can use when the subject matter was set beforehand. The interpretation of each works was also left to each individual visitor’s reading. Asmudjo only gives a brief message, that he wishes for the visitor to enjoy the process of making a work (its method) rather than only its end product. 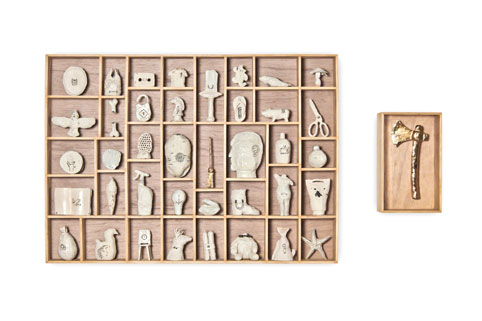