I Nyoman Tjokot (1886-1971) was born in Jati village, Tegalalang, Ubud, Bali, Indonesia. Also a pemangku in his village, Tjokot drew inspiration from reading sacred Hindu texts from lontar leaves. Afterwards, he would meditate in a shrine around Tegalalang, at Pura Agung Taro.

He found magical expressiveness which was basically an ancient Balinese in essence. It was always featured in the form of iconic beasts or demons in Tjokot’s hands. Unlike many others, Tjokot did not draw outline before he carved. Based on his imagination and instinct, he would sculpt his heart out, adapting to the original form of the medium.

Another interesting character about Tjokot is the way he chose his wood pieces. It is said that he would never chop off a living tree, he would only use the abandoned ones, the ones he found in the riverside.

Almost ignored in his own country, in the 1960s Tjokot has already been regarded as a “Maestro” in many overseas countries. In 1969, I Nyoman Tjokot was awarded the Wijaya Kusuma prize by the Indonesian Government. Along with a certificate and a medal, he was also given the prize of Rp 100,000,-. Today, 30 years after he passed away, the world still acknowledge Tjokot for his primitive experessionist style.

His works were collected by: 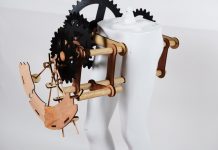