After six months, Raden Saleh returns to Jakarta in another form. Not only through his paintings, as in the exhibition “Raden Saleh and the Birth of Modern Indonesian Painting” at National Gallery Indonesia, Jakarta 3–17 June 2012 – a record–breaking art exhibition that drew in the most visitors: 20 thousand people. Raden Saleh came back to Jakarta on 11 December 2012, at the Goethe–Institut, in a book that contains: his works of drawings, sketches, lithographs, and 59 oil paintings; as well as letters from this celebrated “Painting Father of Indonesia”. In the 357–page book, now many Indonesians no longer only know the name and myth of the first Indonesian artist to have gone abroad; not only what his works look like, but also his struggles, his ideas, as well as many sides to his life (see: Book Description).

The book Raden Saleh: The Beginning of Modern Indonesian Painting, written by Dr. Werner Kraus (Director of the Centre for Southeast Asian Art in Passau, Germany), is a great contribution not only in terms of Indonesian modern art, but also in terms of Indonesia’s history and culture. The book deserves wide recognition, both from the public as well as from the government. In his opening remarks, Kraus stated that the book was fully dedicated for the Indonesia public and aims at provoking the nation’s memory of the often–forgotten Raden Saleh. 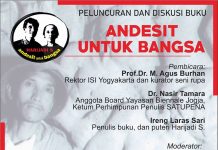