Pain and suffering are not always terrifying or ugly. There are a number of works that purposefully take suffering as its subject matter. Take, for example, the painting Pieta with St. Jerome and Santa Maria Magdalena by Pietro Perugino, or an even more extreme example of the terrifying, the slab of beef in Chaim Soutine’s Carcass of Beef. Although the narration within it tells us of sadness or the unpleasant, these works are still capable of showing great beauty and elegance.

Unfortunately not all artists who are motivated by this are successful of doing so. One of them is Jumaadi, an Indonesian artist who holds a Master of Fine Art from National Art School, Sydney. There appears to be something unfinished in the 75 works that he exhibited in a solo show titled The Figural Poetry of Jumaadi, at Gallery Art:1 Jakarta, from 29 January – 4 February 2013. Whether this was accidental or not, yet his works, especially his two dimensional works, display a lack of maturity in its conceptual execution.

There are three media that Jumaadi worked with in all of his 75 works, which are paper, canvas and metal. In several of his paintings, Jummadi wrote down poetry – which is one of his hobbies. On one hand, this approach strengthened Jumaadi’s attempt at creating a poetic effect, yet on the other hand it also shows a lack of confidence that visual language may create its own poetry.

As a whole, Jumaadi’s sculptures are more interesting than his two dimensional works. The issue of the theme aside, artistic expression – whether this was done in purpose or otherwise – in his drawings were not executed well. There is no spatial dimension: the objects appear flat, as if only showing one side of life. His technique in applying colour also does not reveal a consideration to the thickness of thinness his media. If these technical issues were done purposefully, or for particular reasons, still the outcome fail to stimulate the audience’s sense of enjoyment.

Jumaadi’s works emphasize concept. The works have a strong thematic aspect with textual narration that, despite being personal, remains easy to decipher as well as being communicative. Even so, a work of art should not simply sell concept. When concepts synergizes with the artist’s expressive language, then the reading of the works will not stop at comprehension only, but will also give pleasure to the audience.

What pleasure came from visiting Jumaadi’s exhibition was from his sculptural works, from ones that are created from bronze to ones from aluminum sheets. The artist, who was born in Sidoarjo, 25 September 1973, created 14 sculptures inspired from the 14 stations that Jesus stops by as he carried his cross to Golgotha. All of the sculptures display a figure carrying a heavy load in various forms: house, elephant, a winged child, to an airplane.

Jumaadi created the figures to represent a society in a state of disintegration, where they engaged in acts of   pillaging by stealing refrigerators and doing so in main streets. But, when you look at this work closer, there are aspects of the myth of Sisyphus in Jumaadi’s sculptures. It is as if they are trying to symbolize the suffering of carrying burden endlessly as with the figure of Sisyphus in the Greek mythology.

The exhibition also shows a 10-minute video about Jumaadi telling the story of his father who once made a boat for him. “Our village was on the periphery, a small dirt road leads up to it and it’s close to the mangroves. Since we live close to the waters at the time, there were a lot of rivers then, so the boat was an effective means to connect us with the next places…” tells Jumaadi. The memory of the boat came up in a number of his drawings, one of them was a painting showing a man carrying a boat. The work implies that even memory may be a burden that clings to the journey of life.

All the works in this exhibition was created within six months. The price range for works on paper is below Rp10 million, works on canvas is between Rp6 to Rp60 million, while the sculptures are between Rp75 to Rp95 million. 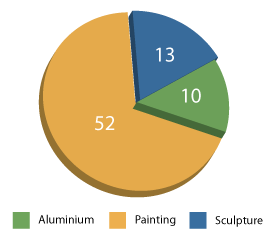