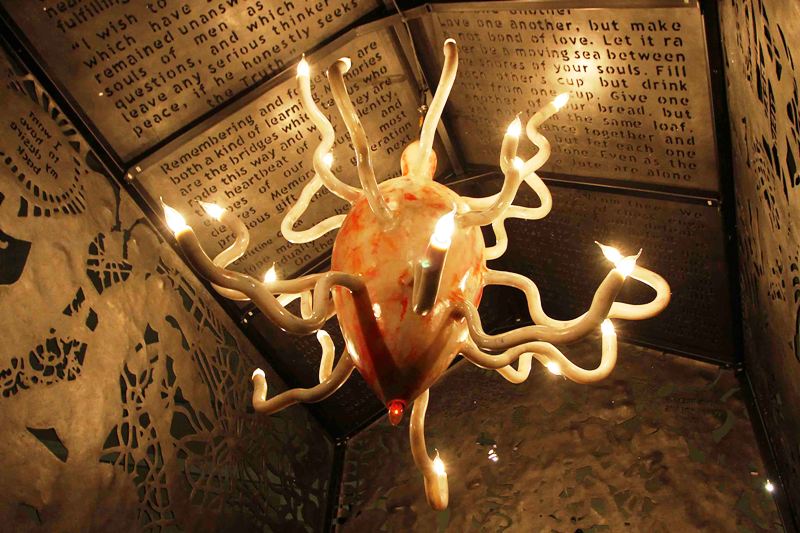 Identity and ideas of originality have turned out to be strong issues in present discourses. Entang Wiharso raises this theme in his most recent exhibition.

Regional and continent transmigration has become a common practice. People are easily getting in and out of the far different, sometimes downright opposite, cultures.

The support of communication and the globalized economy have pushed people to migrate, which later bring a strong implication on matters of identity and originality.

Though not many people consistently, and consciously, discuss this topic until the end, except for those academicians who are studying this topic or at least views the interaction seriously.

Entang Wiharso is one the few people who seriously reflect the condition. Through his exhibition themed “Geo-potrait #2” in Salihara Gallery from 12 October – 11 November 2013, the visitors can see his intention in responding to the theme. He is serious, not only because he cares for the theme, he also be a part of global interactions that turns him doubtful of the initial meaning of identity and originality.

Entang uses traditional idioms he grew up with, hence providing initial solid meaning of an identity – Javanese culture – for him to share his own version of cultural trauma in facing relative situation and identity.

His marriage with an American woman and his commuting living between Indonesia and United States provides a discourse practice of what identity and originality are. Suffice to say, he is very well acquainted with the theme since he is directly involved in it. It is the basic thing of his creative process.

This artist doesn’t work on the theme as something out of his reality, but he works on it as someone that clutches it very near to his heart. Thus, at times of this identity discourse is talked about, Entang is an important part of this issue and he shows that in his artworks.

There are nine artworks in this solo exhibition. Many of that are made in 2013. He uses various media in the making, both two dimensional ones and three dimensional ones. The artworks display the traumatic situation, Entang’s specialty.

Those acts as the interrogations of an issue, expressed clean cut in cut out, paintings, and digital print media. The artist himself admits that by using various media to make an artwork, he gets more possibilities in being creative rather than only using a single medium.

The artwork that displays a solid leaking identity is “Temple of Hope, Hit by a Bus” (2011). It is made of mold compositions of graphite and resins forming a simple house despite the temple title. There is an inscription etched on its wall, made of graphite and resin, whilst the void content is filled with a hanging white thing meant to be the house’s heart.

The thing is equipped with a lamp on each end. The lamps then turn the seemingly solid temple to possess a spacious and sublime room. The lights inside the building turn the inscription and figures etched on the wall to dance wildly on the surrounding walls. The solidity is crumbling in forms of shadows. That is the imagery of eternal, unchanging identity and originality, which at once are no longer the same.

Similar to the concept of Temple of Hope, Hit by a Bus, Crush Me (2012-2013) also deconstructs the solidity by providing spaces inside the artwork and scatters it around by using the installed lamp in a heart form. This artwork is wall-like, usually found in palace or Javanese noble house. The wall, however, is not meant to be a barrier, but it is meant to represent the figure of solidity itself.

The walls inside Javanese noble houses or even in any palace represent the limitation and externalization of an identity and originality used to support the power of a king over his community.

The lost of said identity and originality in turn makes the authority gone. For Entang, this way of thinking has gone impossible. The identity is leaking, being absorbed everywhere, affecting each other.

This idea is heavily recognized in the painting titled Reclaim Paradise (2013). The 300×600 centimeter-square painting displays the confusion in getting the identity and originality clear. Instead of confirming, this artwork has lays a sheet of doubt, whether the figures inside the artwork are related or not.