For Antonio Sebastian Sinaga, being faithful to God is nothing more than an identity now. There are no peace and desire when His name is mentioned. If so, does the figure of God still necessary?

Growing up in a religious family, Antonio is acquainted very well with various religious activities. The religious stories are served in various images and shapes, taking permanent residence in his mind. The very same stories are now the sources of his inspiration in making artworks. At least for the last two years, according to him.

This week at 27 October 2013, Antonio held his first solo exhibition post his graduation from Faculty of Design and Fine Arts of Bandung Technological Institute a year ago. Apprising a theme In Absentia, meaning inexistence, Antonio exhibits 14 photographs and seven art installations using stained glass, retelling one vital incident in Christian religion’s development in the 6th century, 14 Stations of the Cross.

Intriguingly, Antonio dismisses the vital figure of the event in his artworks. He persuades his art enthusiasts to re-think the core ‘meaning’ of God, which is steadily depreciated. He wants to create an odd feeling of hope when they see his artworks and then finding back the missing glory. 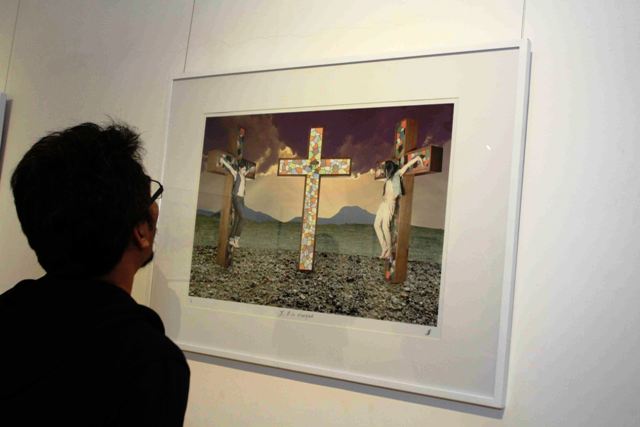 “Seeing various religious images, Antonio felt empty and vacant instead of being enlightened. These feelings are the one that he wants to convey through his artworks,” said Rifandy Priatna, curator in of said exhibition that is held in Roemah Seni Sarasvati (RSS) Bandung until November 12th, 2013

He realizes that him choosing religious theme as the creativity source is different from the standard of his fellow young artists. Though it is the difference that seems attractive to Rifandy to elect him as one of the six young artists to be given a chance to hold a solo exhibition with theme Beyond the Borders (Menembus Batas) in the series of Bandung Contemporary 2013. Other artists included are Ardiansyah Arif Fadilla; Bonggal Jordan Hutagalung; Taufik Setiawan; Mirfak Prabowo, and Nurrachmat Widyasena.

“They’re chosen since they manage to inject honesty into their artworks, relating experiences, knowledge, and thoughts into the artworks,” said Rifandy. “For Antonio, he knows where he will bring his artworks I the future. It is something that only few artists have”.

For the audiences to have a better reception of the religious theme, without leaving the conventional sense and creating a controversy, Antonio presents the figures wearing the current clothing style and visual language in his photographs.

Instead of wearing long black cloaks with faces covered with beards and long hairs – just like what he depicts until recently – Antonio presents the figures in black leather jackets, jeans, sneakers, or short gown with high heels. The imagery also views the consumerism as being holier than the God Himself. 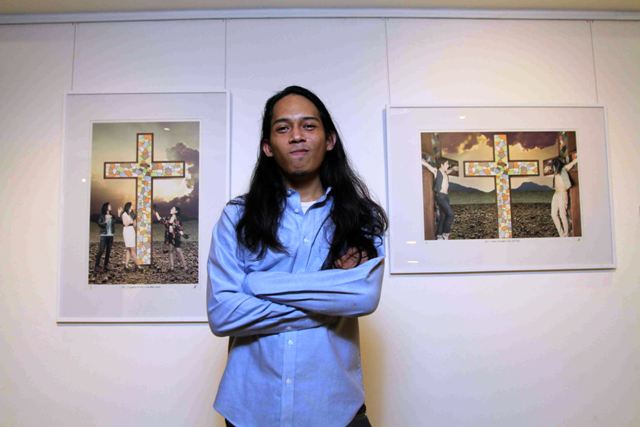 The existence of solo exhibitions in the series of Bandung Contemporary is not without purpose. As what have been understood by Indonesian artists, solo exhibition is a right of the artists with years of joint exhibitions under their belt. Those who had just graduated from Faculty of Fine Arts, have no such rights.

“The solo exhibitions for these young artists are intended to break through the general construction that solo exhibition is a form of final achievement, infinite and unique,” said Rifandy.

For him, the construction is not completely acceptable since solo exhibitions are not that much different from joint exhibitions. They both are the fields for artists to experiment and express themselves on. The most important thing is, according to him, is how the artworks in said exhibitions fish out readings and dialogues from the visitors.

Solo exhibitions are also the easiest way for an art enthusiast to see how far has the artist developed. It will be very hard to ‘read’ a lone to a group of three artworks exhibited jointly with other artists.

“Artists, along with their artworks, exist and ceased in line with various massive, short exhibitions. We no longer have times to interpret and stomach the artworks since they are offered at the same time,” said Rifandy.

The matters of solo exhibitions aside, I see this as an important matter in the art world’s stakeholders, namely galleries, collectors, and auction houses. These parties are vital in providing chances to the young artists with no portfolio to show the thoughts, creativity, and the dedication in Indonesian fine arts.