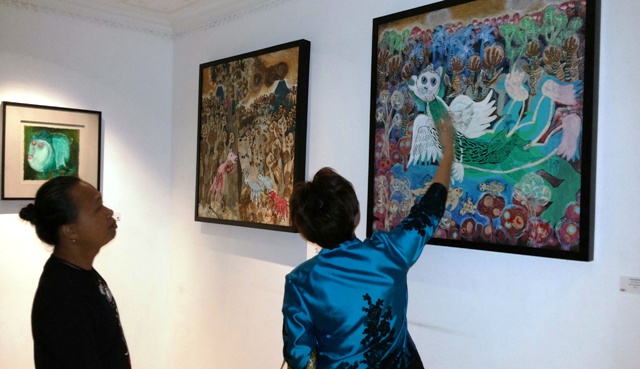 Exploration has been a way of life for Klowor Waldiyono for the last 24 years. He mixes techniques, media and creative ideas deemed ‘unsalable’ in Indonesian fine arts market. He is now ready to greet his viewers with sprightly ideas.

A dragon of burning red colors is smirking so wide, baring its sharp teeth to the world. Its body is paraded by cat humans. A jaran kepang dancer jumping agilely, not unlike a hopping horse. These two dance together around the Borobudur temple in the middle of the canvas. The fanfare is so alive with bright-yellow janur (coconut leaves), flowers in each color and trees.

It is how Klowor capture the beauty, luxury and festivity of Borobudur art festival in his artwork with the same name. Bright colors explode in the 150 x 250 centimeter canvas. Though it seems full and crowded, the latest artwork of Klowor managed to keep the visitors interested in exploring each dimension in it.

There are at least 49 paintings exhibited in his third solo exhibition, Colour (s) of Klowor in Kemang 58 Gallery Jakarta. The artworks displayed in this occasion are not entirely consisting of new ones. Most of the artworks were produced a decade ago, when a young Klowor started to explore his imagination.

Klowor states that the current exhibition is dedicated to his art enthusiasts, for them to know him more intimately through his creative journey. “For all this time, I’ve been known as a painter with huge, brightly-colored, cat-filled artworks. On the contrary, I also made a number of small and black-and-white artworks. These are the colors of my life,” said Klowor in his opening speech.

Kuss Indarto states that Klowor’s art enthusiasts are able to see his growth and nurture, dynamically involved in artistic shifts for the last couple of years, taken from the catalogue’s preface. The shifts themselves are actually visible from the previous two solo exhibitions which differ in 15.5 years.

For his first solo exhibition – Hitam Putih (Black and White) – held in Bentara Budaya Yogyakarta from December 11th – 18th, 1995, he built his artistic image by presenting cats in black and white. “It is a pity that that identity turns to be a boulder separating him from taking a no-holds-barred approach on artistic, aesthetic journey. It is no wonder that his artworks seem to be stuck in a rut. Thus, he decides to embark on an aesthetic rejuvenation,” wrote Kuss.

A significant change is seen in his second solo exhibition – Siklus dan Sirkus Klowor (Klowor’s Cycle and Circus) – in May 21st – 31st 2011 in Yogyakarta. The artworks were looking more colorful and well-narrated. The figures of cats were no longer a painting of his pet but also a symbol of his narration characters.

Shifts were also visible from the larger size of the artworks. The largest one even reached 2×7 meters. “He started to explore narration aspect. The figures of cats were humanized as the storyteller,” said Kuss.

On his current third solo exhibition, ‘story’ of Klowor presents itself with more colors and solid narration. Cats are no longer the center of his artworks. There is even no cat in some artworks. Klowor replaced the figure with various plants.

“The world is full of colors. Dramas of life, social problems, animals and plants as creations of God. All these exist to make the world revolves dynamically. My artworks are the world’s colorful reflections, and I want to initiate by presenting the figures of human, animals and plants,” said the artist who was born in Yogyakarta in January 31st, 1968.

As what the viewers may have seen in Amanjiwo Resort (2013), various trees and plants turn into a lone focus. Black is the only color on the white canvas, strengthening Klowor’s intention to experiment by drawing plants and animals.

The same thing also applied in Keliling Dunia (Around the World) (2013), a painting of a human trio on a vacation – the models are the family of one of Klowor’s collectors – as the icons of tourist destination countries like Malaysia and France. There is no cat in this artwork. Klowor paints new characters such as flying pigeons, fishes, and colorful trees.

Klowor’s artworks are different from other similar artists like, say, Erica whose paintbrushes are childlike and colors are bright. For Kuss, what makes him different is “the existence of tiny, complicated and complex hatches surrounding the subjects”. In some artworks, lines are overlapping thus a character with multiple dimensions are created.

A question remains, do these shifts, minimal existence of ‘cats’ in the canvasses become a new aesthetic declaration for Klowor that he is ready to leave his identity as “the cat man”? Klowor, in return, answers, ”changes matter to avoid tedium and hone creativity”.