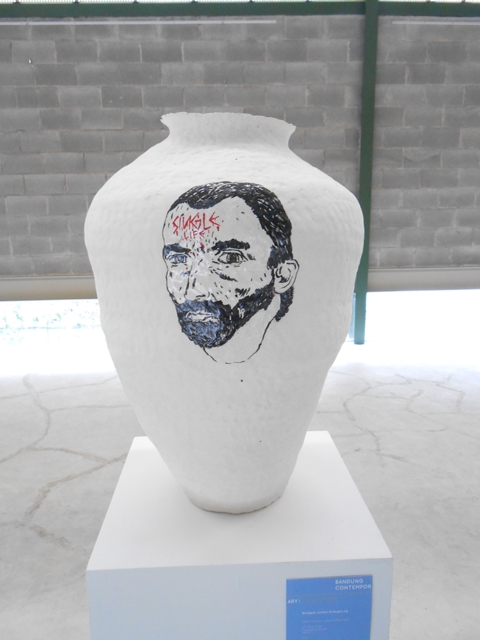 The ceramics courtesy Bonggal Jordan Hutagalung is presented sprightly, not by the forms but by the ornaments glued on the surface. This tactic is successful since the artworks stand out amongst its ceramics predecessors.

You may want to observe the Bonggal exhibition that is held in Hidayat Gallery, Bandung from October 23rd to November 12th, 2013. He exhibits ceramics in their conventional forms. There are 12 ceramics in total which sizes are not bigger than 51 cm and 40 cm in diameters. The form of the ceramics, never mind the variation, is still known as a general form of urn. The ceramics created through the year 2013 are born handmade with 1180 degrees Celsius furnace. The thin, hollowed ceramic’s walls are the result of technique expertise and colors on the ceramics’ outer walls.

Bonggal, a ceramic-degree alumna from Bandung Technological Institute in 2012, chose an out-of-the-norm form. He made ceramics which are able to stand on its own with hollowed insides with a hole on top of it. This form of ceramics is not unusual and people are aware of that. It is just that the variation of this kind has not strayed to far from the line.

An example of an exploration which hasn’t gone that far from the basic forms are That Thing, size 44x38x35 centimeters, not that different from Renegades of Funk size 46x40x40 centimeter. They differ only in diameter size, as in one artwork is more plump than another. The same thing can also be said to El Docto, size 51x32x32 centimeter. Compared to others, this artwork is way slimmer. Seeing the 12 artworks of Bonggal, the forms of ceramics are not too distinguishable amongst themselves.

The existence of these ornaments is made a strategy by the artist to make his artworks different. This provides meanings to the ceramics, also acts as an invitation to the visitors to discuss the latest issues. The artist takes his ceramics to another level altogether by these ornaments. He wants to ‘discuss’ the issues through the ornaments for the discourse to go beyond mere things named ceramics.

The additional objects glued on the artworks emerge associations beyond the artworks’ shape. Ceramics on its own possess no clear messages. They associate only through the process of making from the previous time to today. Bonggal, seemingly, realizes this limitation. To prevent the limited state, his artworks do not stop at being ceramics, they continue to relay messages through inscriptions in particular style, paintings on artwork or other forms of artwork glued to the ceramics.

By gluing various statues, paintings and inscriptions on the ceramics, Bonggal relays his message. Bonggal, though having excellent techniques of making ceramics, wants more than that.

The existence of these ornaments is made a strategy by the artist to make his artworks different. This provides meanings to the ceramics, also acts as an invitation to the visitors to discuss the latest issues. Untitle Pot size 51 x 31 x 31 centimeter, for instance, bears an image of upside down wooden cross. The surface of the piece is painted black, whilst white paint forms consistent splotches with no apparent form. The brown contrasts not much with the black paint of the cross. Though the artwork gives no particular heading to any meaning, it relates to a faith of Christianity.

Another Day Living in the Hood, size 50x30x30 centimeter puts on a statement, complete with a logo of Ministry of Culture and Education. The statement is scripted from iron sheets, “Pendidikan dan Keterampilan (Education and Skill)”. The verbal inscription is provocatively criticizing the programs for community from Ministry of Culture and Education. The problems of this Ministry have been a common knowledge. Corruption, messy national test, higher budget compared to other departments, the unqualified graduates, and others. The artworks are not only a proof of the technical skills, but also the matters out of it. Concerns over urgent social matters in communities have turned out to be Bonggal’s plus point.

The phenomena that is Bonggal’s artwork is none other than a consequence of the age when information are so varied and people are easily connected through the internet. Representing the age of pop culture and youngsters throwing critics to each situation, encourage Bonggal to name his exhibition Pottrippin, which means pottery tour due to the close pronunciation with Pottery trip in hip hop culture. The exhibition of Bonggal, moreover, is a part of grand exhibition Bandung Contemporary.

“Through his artwork, the artist shows his sensitivity or sensibility in capturing reluctantly-received things, blemish, vulgar and anomaly. Going against the norm, not unlike going against the normal worship of beauty, balance and regularity,” said Rifandy Priatna, the curator. ***