A project by the Philippine artist, Kristoffer Ardeña, that sought to answer questions dealing with the relationships between curators, artists, and the galleries that manage them.

“You might ask an artist to explain his art, or ask a poet to explain his poem. It defeats the purpose. The meaning is only clear thorough the search.” (Rick Riordan, novelis The Last Olympian) The above quote perfectly embodies the idea that became the basis for Dear Curator Curate Me (DCCM), an art project initiated by Kristoffer Ardeña, the Philippino artist who is also a Roma Arts artist-in-residence  – a not-for-profit institution established in 2011 by Roy Voragen, a Dutch writer residing in Bandung, Indonesia.

Kris has brought along 15 videos by a number of artists from various cities and countries, many of which were created by unknowns, challenging curators from all over the globe to reinterpret and put forth the argument of their readings.

His aim was simple. Kristoffer, who had studied arts in Germany and now pursue his artistic career in Spain, wanted to provide an ideal platform to explore the role of curatorial concept in the visual arts. Kris seemed want to use this project as a means to seek answer to questions on the relationship between curators, artists, and the galleries that manages them.

“The project does not make any pretense of evaluating the whole spectrum of curatorial practice or criticizing the development of curatorial history. We know curators employ different strategies. It is not my role as an artist to make general analogies; my focus is on the creative impulse. I compiled the selected videos to catalyze certain aspects of this profession,” explained Kristoffer. 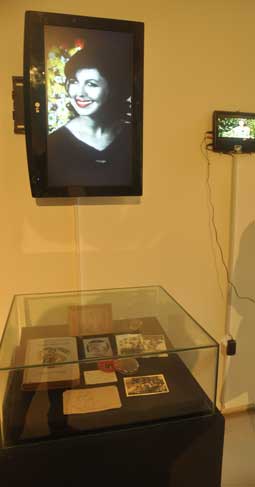 This discursive element explored through the 15 artworks have since expanded along with their engagements and reengagements with various curators from all over the world. The project is now in Indonesia. Kris has granted the Selasar Sunaryo Art Space to showcase all the randomly-selected videos for reinterpretation by Indonesian curators. Selasar Sunaryo, responding to Kris’ challenge, invited Rizky Lazuardi and Chabib Duta Hapsoro as curators.

Kris made it clear he was not there as an artist – perfectly logical since none of Kris’ artwork is appearing in the exhibition. However, we may have a better understanding of the position he took for himself from his explanation at the discussion. “I work with concepts, formulating ideas so that they would catalyze, become fluid. I do not suggest, merely jump-starting this project, then, let it have its own direction,” he said.

Rizky’s re-reading of the videos compiled by Kris resulted in the art exhibition, Ghost 2013, shown at the Selasar Sunaryo’s Side Gallery from 19 May to 8 June 2013. The curator used the word “ghost” to underline Kris’ conceptual overture by transforming the exhibition into its own artistic event. Initially, Rizky and Chabib had hesitated to continue with the exhibition as they felt it was incompatible with their usual curatorial style.

“Normally, for any exhibition we would seek the patterns connecting the artworks, whether it relates to the subject matter, period of creation, movement, or others. However, Kris had chosen these 15 videos arbitrarily,” said Rizki.

One such example is Man With a Movie Camera: The Global Remake (2007) by the US artist, Perry Beard. The work was created by involving general public from all over the world – the artist had uploaded the video onto an internet site — depicting their own interpretations of the original film script A Man with a Movie Camera (1929) by the Russian cineaste, Dziga Vertov. The video tried to render a picture of the relationship between an artist who worked on a conceptual level, the past, and a technology that is shared by millions of people.

Bard’s video has no relation to the work created by Elina Talvenesaari, How to Pick Berries. This video depicted a competition between local citizens and visitors during the harvesting of wild berries in Finland. Then, there is Michelle Dizon’s Empire from the US. It is a portrayal of how television caused discord in the Philippines.

“Clearly, this exhibition demonstrates how artists grabbed and borrowed signs from other works to discuss similar issues, which was the initial intention when the signs were first created,” Rizki explained.

Rizki filtered the 15 videos on offering down to 12.  He, then, invited two Indonesian artists – Adytama Pranada Charda dan Theo Frits Hutabarat – to join the exhibition. Chardra came up with Measure of Coercion while Theo Frits created The Scandinavian Summer.

“Both were considered the most appropriate to participate in this discourse on the borrowing and re-borrowing of signs in video artworks. Both represented a generation that have become concerned with the absence of collective memory as the result of the immense flow of information,  a condition that has provoked them to reintroduce the body and the experience of the body in history,” said Rizky.

Senior artist, Krisna Murti, who inaugurated the exhibition, admitted his difficulty understanding Kris’ concept. “The DCCM project successfully introduced new thoughts to the art world, subtly but subversively trespassing on the myths and hierarchy of the art world.”

Visitors who plan on catching the DCCM exhibition are advised to allocate themselves ample time to enjoy the show due to the lengthy duration of some of the works.