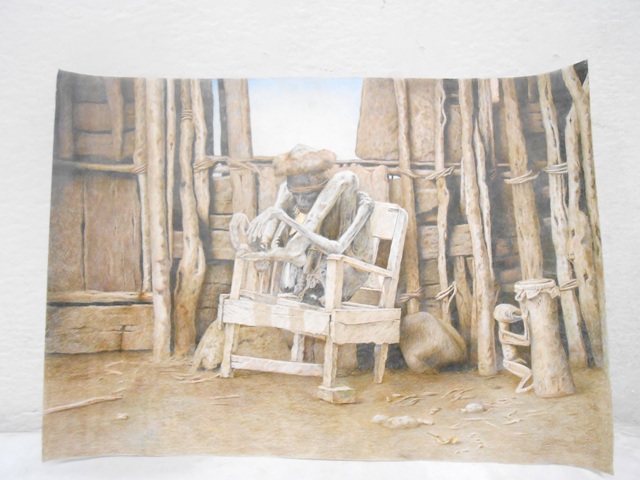 Ignasius artwork is a fine hatches formed by an excellent technique, a high personal value and an enticing visualization with a strong local theme.

The drawing competition held by the National Gallery has chosen its champion, a painter named Ignasius Dicky Takndare. The picture is titled Werupak Elosak, drawn on an A2 paper with colored pencils.

The picture presents a figure of mummy who used to be alive with a name Werupak Elosak. The current age of the mummy is 234 years old. Werupak Elosak wore intact traditional clothes, koteka. He used to be a war general and died due to a spear stab wound. Werupak’s body was then turned into a mummy. Besides appreciating his goodwill, his body was mummified due to his own request. Werupak himself asked to have his body mummified after he died.

In Ignasius drawing, Werupak Elosak is hatched in a seated position with a foot propped up since it is way too short, whilst curling on the chair with a stick-thin body and empty sight. There is a wall made of boards tied onto an intact tree. On the side, a musical instrument akin to drums, a tifa is being kissed by an alien creature.

Werupak Elosak screams a silent shout of the figure on the chair with a stick-thin body, empty expression, and a room with old-boards wall. The artwork is informing its viewers of the condition of Papuan through its cultural history.

In November 16th 2013, five juries state that his artwork is the most suitable of the Champion of the theme “Panoramic Indonesia”. These five juries are Ivan Sagita, I Gusti Nengah Nurata, Hartoto Indra, Sarnadi Adam, and Ipe Ma’ruf.

The first runner up is taken by Engga Romadioni with Panen Tiba (It’s Harvest Time), drawn on an A2 paper with colored pencil. Aku Bangga Jadi Warga Yogya (Proud to be a Citizen of Yogyakarta), an artwork of Reza Prastica Hasibuan, pinned the third runner up title.

According to the juries, the winners are already fulfilling fine arts aspects. Their artworks have gone through the 150 artworks from all over the country. The technical and non-technical aspects to determine the champions in Indonesian Panoramic Drawing Competition 2013 held by National Gallery with Multi Arta Mayida as the organizer.

“The five artworks chosen as the winners provide information to us about how the participants get in touch with the local cultures. This is in line with the purpose of “Indonesian panoramic view”,” said I Gusti Nengah Nurata.

The winners in this drawing competition are the artworks with local content. Ma’ Tinggoro Tedong or Toraja Buffalo Offering, the second winner, clearly depicts the process of buffalo offering for Toraja indigenous ritual. Buffalo offering is performed in front of ancestors’ cemetery with sightings of small statues on the outer wall on the hills’ slope.

A different thing about this picture is that the slaughtering process is performed alone, without any specific preparation. There is an adult man holding a rope, binding the nose of buffalo with his left hand, whilst his right hand whips the knife to the neck of the animal. The man doesn’t look bothered though the thing is performed alone. Bloods spray into the air from the knife wound.

The artwork of Rangga Jalu Pamungkas that snatch the third winner to bring the present Yogyakarta cultural nuance. The artwork is titled Iki Yogya, Le! or This Is Yogya, Son! The artwork made of colored pencils portrayed a grandmother in batik jarik (cloth) on her lower part and a Javanese batik clothes on her upper part. The hair is tied in a bun, with a bag slung on one of her shoulders. 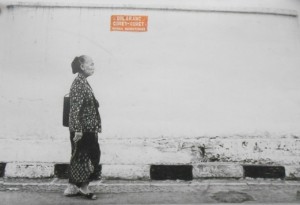 The artwork titled “It’s Harvest Time” from Engga Romadioni, on the other hand, depicts a Thanksgiving-like ritual of villagers at harvest time. The artwork is another kind of unique due to the usage of 17 collages glued on an A2 paper. The collages form various farm results, namely corns, fruits, carrots and others. The animals portrayed are cows and fishes. The idea is not only brilliant in theme, but the rarely chosen method of using collages is also the one that made the juries chose this artwork.

The picture Aku Bangga Jadi Warga Yogya (Proud to be a Citizen of Yogyakarta) of Reza Prastica Hasibuan takes the title of Second Runner Up, a close-up portrait of an elderly wearing blangkon (Javanese traditional headwear), Yogya’s becak (pedicab or trishaw), keris (a kind of dagger, sometimes used as ceremonial tool), Monument of Yogya, Mount Merapi, and a unique lamp of Malioboro. The regalia of cultural Yogya is the winning factor of this piece.

“Our valuation is performed through multi-interpretative ways both from the forms and thematic aspects. One of the points is the not verbal artwork,” said Ivan Sagita, famous with cows as his painting objects.

The juries narrow down the number of artworks from 150 to 50. The latter number is then narrowed again to 25 artworks, to be turned into eight artworks. Three artworks are chosen as the main winners. The rest five are being put together into the 25 group, subtracted by the three winners, turning 22 as the number of artworks. The latter is the group of which the juries chose the First and Second Runner Up. Engga Romadioni’d artwork is chosen to be the First Runner Up, whilst Reza Pratisca Hasibuan as the Second Runner Up.

The five artworks will be exhibited along with other 50 paintings in Pasuruan, East Java, this December. Congratulations to five winners of Indonesian Panoramic drawing 2013.***