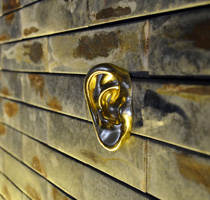 Myriads of media are crisply visible on the artworks exhibited at Jogja Biennale XII. Participating artists from five countries in Middle East region mostly use video as their media.

Drizzles serve no stand for Tisna Sanjaya to ride a boat whose move is not unlike a swinging pendulum. He is accompanied by the Chief Patron of Nahdlatul Ulama (NU) DIY, Ashari Abdullah Tamrin who sits on the left side of the boat delivering a sermon. Tisna himself walks back and forth, from the middle to the right side of the boat, throwing plastic balls to the audience. His action is toned up with an Emprak traditional performance from shalawat group of Kaliopak Boarding House, Yogyakarta. It really is a moving moment seeing this shalawat group, whose members are mostly elderly, sitting with their knees folded while singing under the rain.

The performance Doa Kora Kora (Prayers of Swinging Boat) by Tisna and a group from Kaliopak boarding house acts as the opening of Jogja Biennale XII: Equator #2 at Jogja National Museum, Saturday evening (16/11). The gloomy weather might contribute to the sleepy opening of this year’s Jogja Biennale whose theme is Bukan Jalan Buntu (Not A Dead End).

The Biennale which will take place to January 6th, 2014 is the second series of Biennale Equator, deliberately raising Indonesian collaboration with other countries above the equator line of 23.27 North Latitude and South Latitude. This Equator series are launched in 2011 and planned to surround the Earth to 2022. For this second series, Jogja Biennale works with five other countries in Middle East Region, namely Saudi Arabia, Oman, United Arab Emirate, and Yemen.

There are 35 artists curated by Agung Hujatnikajennong and Sarah Rifky in this exhibition; 16 Indonesian, two Saudis, 14 Egyptians, one Omani, two Emiratis, and one Yemeni. The artworks of these artists are exhibited in five places; Yogyakarta Cultural Park, National Museum of Jogja, HONFablab, SaRang Building, and Langgeng Art Foundation.

In these five places, a lone room is provided per artist to exhibit their artworks, thus the common sights of site specific installation. It results in the varied media used by the artists. Many times, the media used on site is the finished materials. Take the artworks of Syagini Ratna Wulan, exhibited in all five places themed 100 Moving Numbers (2013). Cagi – her nickname – placed white-colored lockers with numbers on the doors. The artwork is similar to a game that hands out card to the visitors which will lead them to visit the lockers. Inside the lockers are various mundane things such as shoes, typing machine and clocks.

The multimedia artworks based on video installation and sound installation are also another common theme of the artists’ artworks. Examples may be found in Venzha Christiawan’s sound installation that tells a relation of aliens and pyramids, HONFanlab’s multimedia installation at Langgeng Art Foundation, and Duto Hardono’s artwork which allows the visitors to turn the vinyl records above the turntable. This interactive performance generates staccato sounds combination.

The diverse media; both the finished, daily one and the specifically made one; can be found at the installations of FX Harsono and Eko Nugroho. Harsono’s room is full of indigenous things from Cirebon. His room’s occupants are varied from a painting of mega-mendung-patterned garment, imaginary animals like buroq or a horse with wings and elephant-like head, to copper teapots with Arabic inscriptions on their surfaces. Whilst on one of the walls, there is a screen displaying a young woman, in steps, wearing a veil. Through this artwork, Harsono depicts the syncretism life of Javanese, Sundanese, Hinduism, Chinese, Arabic, and Islamic in Cirebon region. Whilst Eko Nugroho’s artwork is titled Taman Berbulan Kembar (Twin-Moon Park). The media used in to make this artwork are in variable of itself; resin statue, plastic flowered arranged to form a three-story skulls, a praying costume, dried flowers, also his specialty, mural.

Syncretism, migration, and mobility are truly the most used narration shown in the artworks. Take Ugo Untoro artwork which consists of 43 hanging horse feet on the ceiling of Yogyakarta Culture Park in the artwork titled Deru (Roar). It reminds us of galloping horses, ushering the wayfarers. It is there that a cultural spread happens. Migration also exists in the artworks of Middle East artists. Take Ahmad Mater’s artwork which displays the hajj process in his country. The unique thing about these artists is that most of their artworks are in a form of video or photography.

As a biennale, the idea and concept the artists offered is thickly condensed hence the possible disappointment for those who expect to find exploration on techniques and aesthetics. The XII Biennale Jogja underlines the flowing, complex limitations in visual contemporary world. It really is a pity that the “craze” of these artists is less supported with a comfy exhibition room. On its first day, Saturday (16/11), the electricity has gone off for a couple of times. Not counting the overall untidy, abandoned-like surrounding environment of Jogja National Museum. The gloomy weather – continuous rains – turns the opening of Biennale Jogja less enjoyable and a bit deserted. It is only after the rain subsides that more visitors come to enjoy the exhibition. It is a given that this biennale will only end in January 6th, 2014 thus a chance to enjoy the exhibition unhindered by the weather is still available for those who want to experience the artists’ migration concepts. 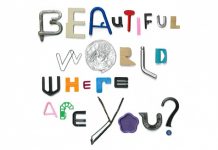 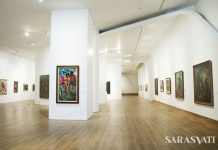 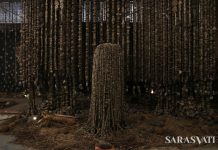