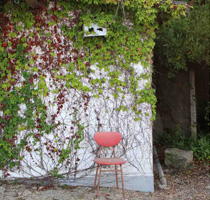 His art expression is an intervention. The public space is his playground. Unsettled, indiscipline, and injustice are the main targets of his artworks. Never mind that his works are labeled illegal just because he has no permit issued by security officers. 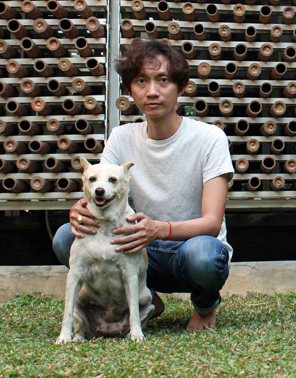 A framework of giant ball filled with plastic waste greeted Sarasvati when we entered Irwan Ahmett’s, nickname Iwang, studio slash his own private residence in Pasar Minggu, Jakarta, for the first time. Just like what we thought, the ball was Irwan’s next art project. Currently, that ball is standing proudly in the junction of Taman Makam Pahlawan Kalibata, South Jakarta.

In the visit, Iwang was busy coordinating with his team to prepare some art projects scheduled to be finished at the end of this year. Amidst the team were his wife Tina Salina, Iwang’s wife and partner in his works.

Most of Iwang’s works describe his private self and his point of view in responding various social dynamics around him. He likes to ‘read’ the problems in big cities, including Jakarta. Thus, when this complicated city is supported with various rules, he felt that he also found his playground bulldozed. To Sarasvati, he admitted that he missed the face of Jakarta when it was full of chaos and mischief. His works, then, is a form of war, war against establishment.

How did you find yourself in the art world?

After graduating from high school in 1993, I decided to continue my study in Graphical design major of Jakarta’s Art Institute (IKJ). However, I did not graduate from there, since I decided to resign from the institute. In 2003, with my wife – Tina Salina – I decided to establish a private graphic design company.

You are labeled as an anti-establishment artist, do you agree with that?

Ha..ha, actually I prefer when everything is going well. Though, I like to take economic train since I can see various life dramas unfold. I can figure out which song is famous and what model is in when I take the train. Seeing the street vendors offering their goods, the passengers cooperating to stay safe from any kind of criminal offense and their anger when the trains are late or stopping, until the incident of  passengers falling off of a train and suicide acts. Those are in line with mapping society.

For some people, these conditions are upsetting. But it is life, it is a drama. However, when I returned from Germany (Irwan was taking part in an artist residency in Berlin from May to June 2013), I was surprised by the development of our train system. There are no longer people sitting on the roof of the train, there is no trash lingering in the carriage, there are no more street vendors and pickpockets. People are trying to keep their image calm and collected. Before, people were used to chat with one another, but today they are busy with their own gadgets. Where did the brutal and full-of-riot Jakarta go? Suddenly, everything goes missing. Our life is full of control. We are forced to say yes for public interest, even when our hearts say no. Then, we see brands with the existence of commercial advertisements. We are forced to enter a system which continuously feeds us to be consumptive human.

Then, does a controlled community bother you ?

Human has an affinity to keep controlling. Still, the control over our community has gone too far. Honestly, Indonesians are difficult to control. If we are being controlled like the Japanese, that would be weird. We lost our identity and the controlling party is not always right.

The act of control itself has been there since early age. We were being mass-produced organically hence there are particular patterns of which we are not able to do without. Just like roots of a tree, planted in a pot, which consistently grows in a same form as the pot even when the pot is broken. Everything has been started since we were on primary school. Various rules affect our paradigm and creativity. System rules that someone is called clever not for their ability on producing innovations, on making something radical. On the other hand, those who obey the most, who answer the fastest, and correct according to the teachers’ truth standard.

In the end, our creativity gets chopped off. We become creatures who are easy to control. Rules and regulation are the new religions, of which people no longer question when it applies. Honestly, we are not ready to be a community of a developed country. Human has his or her own moral control. It is a gift from God, so there is no need to control over it. Conversely, our irregularities may be the one that turns the wheel of the lower class society.

How can it be?

Take waste for instance. On my next project, I want to see the circulation of waste in Jakarta. However, getting some waste in Jakarta is not easy. The waste is controlled by merchants. There are thousands of people involved, from housewives to village waste collector. You can imagine what is going to happen if the waste is managed in a modern way, with engine, just like in England and Singapore. What are they going to do? When everything is modernized, local wisdom goes extinct.

I have a thought that handling the waste is not by buying jacking vehicle and applying a good waste management, but by suggesting people to keep on littering, in order to keep the scavengers alive. This is where an art project becomes important. My ultimate weapon is playing. When I play, making mischief, churning critics to the ruling party, I can offer a solution and a new point of view to a problem. Even if artworks are not always the solution.

You often use video as your media. Why do you do so?

Video is not the only medium I use in working. I also use photos, sculptures, and installations. However, when it comes to the real work; the most effective way to present my work, video comes out as the winner. My interest in video appeared when I met my friends in ruangrupa. Even more, my first video work was made when I took part in OK festival. The first video, in 2003. In my opinion, their ideas are quite refreshing.

At that time, video art was not as popular as today, even the tools were quite expensive and technology was still hard to access. Even so, I saw the potential of video to be the next medium used in working. First, since video is segmented, with duration, of which is not available in other media.

Technically, a video is able to work on its own. It is not the same with the static manner of photos and paintings. The displayed works may appear more dynamic. If added with other effects such as sound, it may turn remarkable. The works shall be able to display emotion, adrenaline, only leaving the sensory of smell out. Video is the best documentary media in present time since it enables its user to catch the event realtime. It is important because when an incident occurs, the artwork also occurs.

For me, without meaning to belittle other form of arts, video is a powerful artwork medium. Video is easily accessible due to its cheap price. There are no cellphone without a video feature. Video works are also easily distributed, different with paintings and photographs which need special ritual alone. Being uploaded into Youtube is enough and the video will be viewable for the people around the world.

The existence of video works needs not only a new way of reading, but also how to store a video works. Storing artworks in a form of conventional means, like canvas, is no longer up to date. For instance, rich people are no longer bringing their 100 million rupiahs physically, everything is in digital form in a card. Even television has been converted to digital form, no longer in a form of satellite television.

What I mean is that, our treatment to artworks will evolve in the future. Artworks will be imitated to its digital form. There will be no more use of an actual storage, instead there will be a usage of a binary storage. If we still utilize the old formation, it is doable, but only to be put in a museum, to be made into a storable artifact. I think videos are the indicator and starting point of the next level of art. In the future, it is possible for us to enjoy the art without coming to the galleries or museums. All it will take is to upload and watch in our chosen time and place.

How do you work?

There are two characteristics of which I am partial to be when I am working. First, spontaneous. Ideas appear when I see something and all that is left to do is just a final touch for the work to be suitable to be called an artwork. The example is ‘A Final Touch’ (painting spots of blood at the back of a sleeping soldier). I made the floor as a makeshift canvas. Suddenly, the result felt very powerful.

Another example is in Feeding the Machine in Berlin. I played with a road garbage cleaner whose way of work is by vacuuming the garbage on the road. I intentionally litter in front of the machine, resulting in the machine following the way I put the garbage. The interesting thing was when the driver of the machine looked confused and frightened of my action. Still, he needed to drive the engine in the direction of my litters.

Second, it is participative, or it needs participation of other parties. The artworks cannot be made spontaneously, it takes preparation. In Propeller People made in Istanbul, Turkey, it takes time to decide the location and the participants. Because of that, when I find a problem that may be the next project, I need to find the core problem first.

Just like an anthropologist, it takes researches and interviews, meet with the local event, and an analysis of the problem. From that point, then it is possible to decide how to respond to the problem. It may take a long time. The concept alone can take up to two months. Not counting the survey of location and the process of looking for participants. 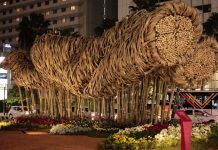 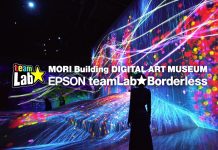